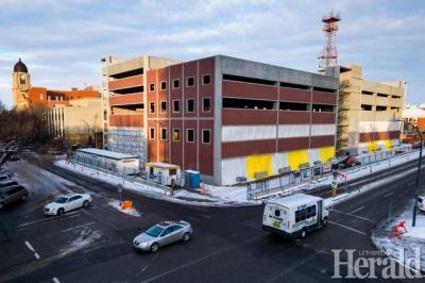 The gigantic crane is gone and all the pre-cast concrete blocks are in place.

And construction of the city’s downtown bus terminal and parkade is under wraps.

But behind the plastic weather wrap, there’s plenty of work underway.

“In the bus drive-thru lane they have installed scaffolding, which will be tarped to keep the area from freezing,” he adds.

Workers are also bringing the main level up to grade, in preparation for pouring the concrete floor.

“Windows will begin to arrive between now and the end of the year, which will close off the lower level,” Johnston says.

That will allow workers to begin framing the office space for Red Arrow, he explains. The inter-city carrier – linking Lethbridge to Calgary and points north – is now the only scheduled service out of the city.

Daily bus service from Lethbridge to Highway 3 communities and Medicine Hat, underwritten by the provincial government, is planned to start in the new year.

Lethbridge Transit support space and public areas will also be enclosed in weeks to come, he says.

“As the weather seems to be turning a bit colder now, the contractor will soon be installing heaters,” Johnston says.

The lower two levels of the facility are being tarped, Johnston says, to facilitate construction of the vestibules adjacent to the elevator, and to paint the ceilings.

“They will continue with some of the exterior site work, but the clock is ticking on this.”

Once the ground freezes, Johnston says, that work will have to be suspended until spring.

“Then the perimeter sidewalks, landscaping and tie-in with existing streets can be completed.”

And commuters can check out the rates for parking on the 293-space parkade levels.

Additional downtown parking will become available when Lethbridge Transit’s bus zones – in place on 4 Avenue for many generations – are transformed into parking spaces.